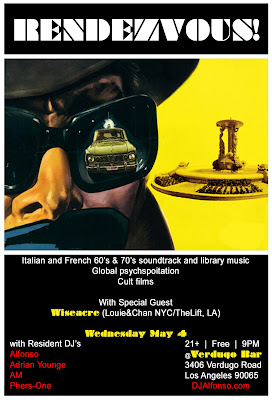 Join us this Wednesday, May 4th as RENDEZVOUS! returns for its next monthly session at Verdugo Bar. For this next session we are excited to welcome back our very dear friend Wiseacre! It is always a treat to hear this fine man's musical selections and we cannot wait to see (and hear) what he has in store for the evening. It should also be noted that it his birthday as well! And if THAT were not enough, RENDEZVOUS! is pleased to announce our newest resident AM!! We will be playing an extensive gamut of 60's & 70's soundtracks, library, psychedelia, funk, soul, and groovy sounds from Italian & French lost archives. Two classic giallo & poliziotteschi films will be screened! 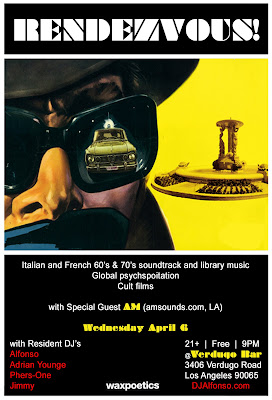 Join us this Wednesday, April 6th as RENDEZVOUS! returns for its next monthly session at Verdugo Bar. For those of you in the know, surprise guests AM & Shawn Lee graced the decks of RENDEZVOUS! last month and bestowed upon us a killer selection of OST's, library, Bollywood, and unreleased original tracks. For this next session we are excited to welcome back AM! Having just returned from SXSW, we cannot wait to hear his musical selections for this next go around. We will also be playing our usual gamut of 60's & 70's soundtracks, library, psychedelia, funk, soul, and groovy sounds from Italian & French lost archives. And if that were not enough, two classic giallo & poliziotteschi films will be screened!

About AM:
With the release of Future Sons & Daughters French electronic pop duo AIR, French chanteuse Charlotte Gainsbourg and legendary Brazilian icon Caetano Veloso all handpicked AM to support them on various U.S. and International tours in 2010. The album, which was produced by Charles Newman (whose long relationship with the Magnetic Fields produced Realism and 69 Love Songs), brought AM considerable acclaim with what Q Magazine described as “a rare talent, juggling everything from steamy tropicalia, to acoustic ballads, to shimmering ’70?s pop” and Spin described as “distinctive melodic swagger.” Future Sons & Daughters was also named one of Rough Trade’s “Top 100 Best Albums of 2010″.


Already hard at work on a follow up to Future Sons & Daughters AM has partnered with London based groove master Shawn Lee on a new full length album to be released in May 2011 with plans for a limited edition hand numbered 12-inch single to be released in April. The as-yet-unnamed album, and the first-ever collaboration between AM and Lee, promises to push the boundaries of soul, pop, electronica and Latin grooves.
(from amsounds.com)
Posted by Alfonso at 2:28 PM No comments: