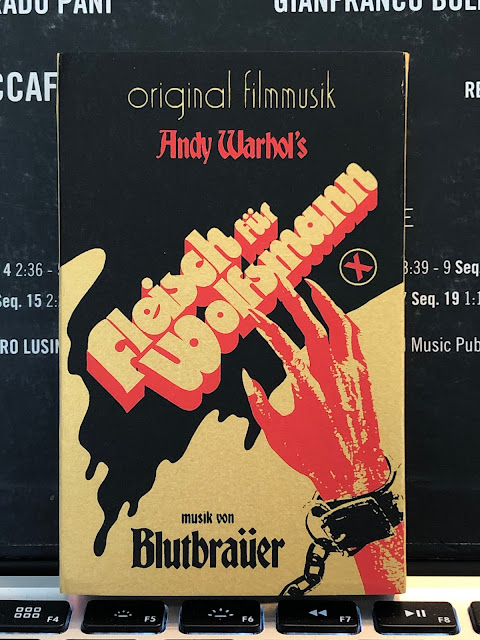 Just to be clear, Blutbraüer are in fact a contemporary musical group consisting of musicians Corey J. Brewer and Erik Blood, featuring flute and saxophone by Joel Culpin. Their latest release, Andy Warhol’s Meat for Wolfman, is a faux soundtrack for an "unfinished" West German film from the mid-70s. This tape features amazing gothic horror cues utilizing guitar, drums, harpsichord, keys, etc. Just for a bit of fun, I created an elaborate backstory to go along with it. This was originally published in a Rendezvous newsletter (be sure to subscribe!) from 16 April 2021. Hope you enjoy.
The year was 1975 and New York pop artist Andy Warhol was riding high from the success of his two monster movies he co-produced in the years prior: 1973’s Flesh for Frankenstein, and 1974’s Blood for Dracula. After a string of double-feature showings in some of 42nd Street’s seediest theaters (a de facto after-hours for the Studio 54 crowd), it seemed only natural to continue on with the cinematic monster mash by producing a follow-up, this time featuring the Wolfman! Paul Morrissey, who directed the previous two Warhol backed films, was tapped yet once again to take the helm of the Wolfman project, but unfortunate financial circumstances and contractual obligations got in the way. Warhol and his fellow producers then approached famed West German b-movie director, Klaus Henninger, to head the production. Of the many major changes put forth by Henninger and West German production company Kinowelt Filmproduktion to the project, one of the most notable was the hiring of West German psychedelic ensemble Blutbraüer to compose the original soundtrack. Henninger felt a different musical direction, as opposed to Claudio Gizzi’s orchestral approach, was required for the “Wolfsmann”. Pre-production began in early 1975, with shooting scheduled for the winter of that year. Just as the score was completed and shooting was about to commence, financing fell through. Not only did Kinowelt find themselves embroiled in a bevy of legal disputes, but their president was arrested on espionage charges and accused of being a double-agent for the D.D.R. (rolls of incriminating microfilm found on his person!). Thus, Andy Warhol’s Meat for Wolfman (Fleish für Wolfsmann) was never completed. Forty-five years later, in early 2020, the soundtrack tapes to this long rumored film were accidentally uncovered in a vault at the Bundesarchiv in Koblenz, Germany. After a series of complex international negotiations, made even more difficult by the global pandemic, the tapes were finally acquired by SFI Recordings, and painstakingly mastered for release by Warren Defever.
Posted by Alfonso at 5:22 PM No comments:

From the Severin Films Podcast page:
"The horrific home invaders at Severin films are BACK to break into your weekend! Listen up as they break down the July 2021 announcements including the infamous film inspired by the Richard Speck spree killings BORN FOR HELL, an extremely under-seen canuxploitation inspired by a 40 day police strike SIEGE a.k.a. SELF DEFENSE, and directorial debut for SFX icon Gabe Bartalos SKINNED DEEP."
Posted by Alfonso at 4:35 PM No comments:

Here's a 30 minute mix I created for our Teatro Malocchio (a.k.a. Rendezvous Film Club) screening of Jose Ramon Larraz's VAMPYRES (1974).
Posted by Alfonso at 4:24 PM No comments:

THE INCREDIBLE 2 HEADED BLOG · DJ ALFONSO'S MUSIC CABINET (EPISODE 29)
Presenting episode 29 of the Music Cabinet! In this episode, you'll hear cues from the latest cassette release from Blutbraüer, an amazing Maestro Morricone track, some Creel Pone goodness, a couple of Bandcamp discoveries, a killer collaboration between Kier-La Janisse and The Rita, and much more. For a complete tracklist, grab a notebook and listen to the episode, as I talk about each and every selection. Happy listening!
Posted by Alfonso at 9:21 AM No comments:

I recently had the honor of contributing an all Piero Umiliani mix for my friend Dina's NTS show 'High Noon'. The first hour features an introduction and anecdotes by the folks at Four Flies Records, an exclusive interview with Umiliani's daughter, Elisabetta, and tunes selected by Dina herself. The second half of the program features my mix. For this project, I was granted access to the entire Four Flies Umiliani discography, so big shout out to Elena and Pierpaolo for that! And huge thanks to Dina for inviting me onto the program!
Posted by Alfonso at 12:42 PM No comments:

From the Severin Films Podcast page:
"The malicious missionaries at Severin are back and they're covered in camouflage this month, because these titles are coming out of nowhere! Listen as your hosts break down the pure insanity that is the June releases. Bruno Mattei's infamous Exploding Hut saga STRIKE COMMANDO 1 & 2, as well as Alan Birkshaw's star-studded INVADERS OF THE LOST GOLD. The only thing in danger of a bad time with these releases is your wallet, because you are going to want to own them all!"
Posted by Alfonso at 12:12 PM No comments: